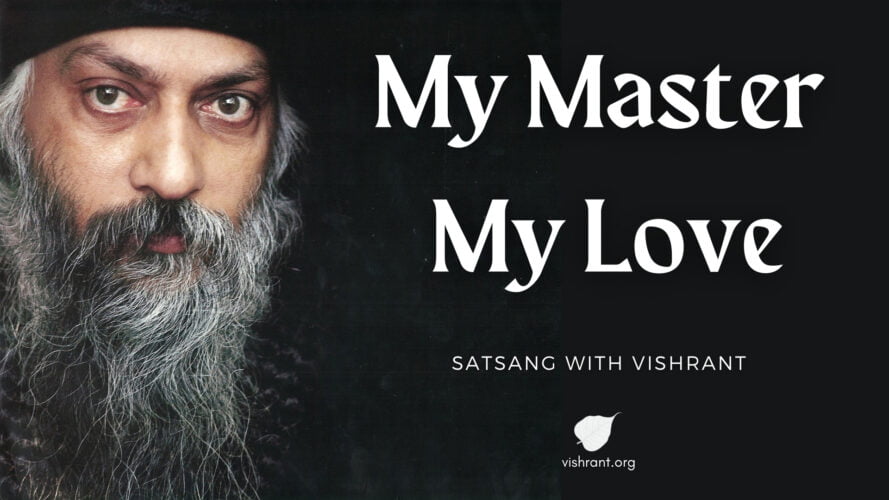 My Master My Love

In This Satsang Excerpt,

Vishrant talks about his relationship with his spiritual master Osho Rajneesh, how he came to be devoted to him, and how Osho’s presence and teachings changed his life irreversibly.

Support Vishrant’s ongoing worldwide teachings by making a donation. Your contribution is greatly appreciated and is put towards making these teachings available for those who seek truth and enlightenment. You can make your donation here: https://www.vishrant.org/donate/

In 1982, I found Bhagwan Shree Rajneesh. He was a spiritual teacher in India, in Pune, and people called him a master, a spiritual master. Something that I wasn’t really familiar with, the idea of a master. It wasn’t really until I sat in his presence that I realised there was a huge difference between him and myself.

When I tuned into him, there was nobody there, and that fascinated me. What does that mean? Because I’ve always been able to tune into people and read them, but I couldn’t find anyone there, and I kept hearing this word, master.

And from what I knew of Star Wars, there were Jedi masters like Yoda, and disciples, students, Padawans, but to me it was very mythical.

Because I was pondering what a spiritual master was at the time, I realised then that only someone who’s awake to their true nature can germinate the seed of consciousness in another human being, and not that they do anything. It is simply the field of energy that is produced when awareness is aware of itself.

Then I started to look at him a little bit more closely. I wanted to see how he operated. What he was doing. Why was he called a spiritual master? And so, I watched him very closely and I suspected that he was using a form of hypnosis to take people beyond the mind. To relax them so much, and then drop them into the emptiness of silence, which is what he was doing. So, I went along and I trained as a hypnotherapist while I was in at the ranch and I discovered he was definitely using hypnosis, a monotone voice leading to a space of silence in the middle of a paragraph. Attempting to help people drop into that silence and find themselves as beingness, truth, consciousness, whatever you want to call it. And so, I started to understand the second part of what a spiritual master is. Somebody who attempts to take people home with different methodologies. Attempts to show them their own true nature through what he referred to as devices.

And so, at some point in this process of watching him and working out what he was about, I fell in love with him and I decided that he was my spiritual master because he was home and I was not. And he knew the way home, and I did not. And he was willing to try to take me home with different methodologies.

And so as my master, I was willing to do what he was asking. I was willing to practice the things that he was teaching because it was very clear to me that practice is the only thing that works. It was very clear to me then, knowledge doesn’t make much difference. Only practice works. And so, he taught witnessing the mind. He taught meditation and he taught self enquiry. And from observing him, he was wide open, which made me develop a practice of openness because I wanted to come home. So, I spent as much time as I could in his presence, when he was here. Satsang was held every morning and every evening and I attended all of them that I could because I could feel the energy field dissolving me. Me as an ‘I’, me as somebody, and I liked it.

I think that people can wake up and not be spiritual masters because to be a spiritual master, there is something else that’s required. The willingness to sacrifice your comfort, for the rest of your life, for others. It took me a while to work out that one with him. I was fascinated by why he needed to have air conditioners on him all the time and that when I interviewed him, why the room was at zero. Why it was so cold. And slowly, I got the idea that everything was pouring into him because he was empty. And as it was pouring into him, it was creating heat and pain in him and the cold air and the cold room helped him deal with it, but every day for up to three hours, he would sit in Satsang in the morning and three hours in the evening, taking everybody’s pain. And I don’t think that many people realise that. And I believe it was because he loved, because that’s the only thing that could motivate you to do that.

People love the idea of waking up and holding Satsang but they don’t understand that when you wake up, you’re absolutely vulnerable to everything. Everything touches you, everything pours into you and it is painful. And so, from my understanding, people can wake up and stay in monasteries in hibernation or ashrams in solitude and not do a great deal with anyone because it doesn’t matter really, they’re profoundly content. A spiritual master is someone who has woken up, someone who uses devices to help people get free, to find home. And someone who is willing to sacrifice themselves for the benefit of their students continuously. And my master Osho did that until he died. I remember seeing him just before he died, noting how weak he was, how gone he was, how feeble he was but he was still sitting there holding Satsang, sacrificing himself, providing a buddha field that others could become enlightened in.

So, I loved him very much and because of his energy field, satoris started happening in my life, glimpses of who I truly was, rather than who I thought I was.

It took a while, a couple of years, before the satoris began but that was the end of me. The end of me as a lot of things. It was the end of me as a businessman. It was the end of me as someone who just pursued things for the benefit of myself. He had germinated the seed of consciousness in me that was growing and because of his training or his teaching, it was being taken care of. Meditation was every day, self enquiry was regular and openness was practiced every day, all day. I don’t think many people knew that I was practicing because I wasn’t into sharing it. Most of my practice was done, in the way of meditation, at night time when everyone was asleep because during the day I was too busy. During the day I practiced openness and I practiced self enquiry off and on all the time because nobody knows when you’re doing that.

So, I became devoted to him. I didn’t really understand what devotion was before that. It’s quite odd for a western man to be devoted to an Indian man but I was devoted.

And when he died in 1990, it broke my heart because someone that I loved very dearly had died, but as a result of his presence and his influence, I chose to serve heart for the next 10 years. That meant putting myself aside for the benefit of others, in service, because there’s nothing else to do here that’s worthwhile. Making money for the sake of making money is a scam.

There aren’t any shortcuts in higher consciousness. And there isn’t any shortcuts that will serve enlightenment. What is absolutely required is unconditional surrender and that cannot be done because it’s a non-doing. So, the ego can’t do it. One has to practice let go and acceptance and if they practice it enough, the mind will stop. It’ll be in surrender, and then at some point, maybe during self enquiry or meditation, the accident will occur where you find yourself as truth, without a ‘you’ anymore. And then it will be up to you to either share what you’ve found, which will be an uncomfortable life, or to become a hermit, which is perfectly okay. But my master said if you find the light, don’t hide it, share it.

So, I try to help people raise their consciousness levels towards enlightenment, to get them out of pain, but also because there’s not enough lights on the planet. And I would like to see some more. I’d like to see more people give their life to truth or God, or beingness, whatever you want to call it but that’s up to you. As your consciousness levels get higher, you realise there’s nothing else to do anyway. In lower consciousness, you think about yourself and your future and your past. What you’re going to do, what you’re not going to do but that’s lower consciousness. The future is not real. The past is not real. Only now is real.

Any questions, any statements, any challenges to this teaching this evening?

Going with the Flow

The Difference Between a Sage and a Sociopath

Finding Freedom with Vishrant: A Conversation on Death, Impermanence & Heart

The Real Reason Why You Should Get Vaccinated Against Covid 19