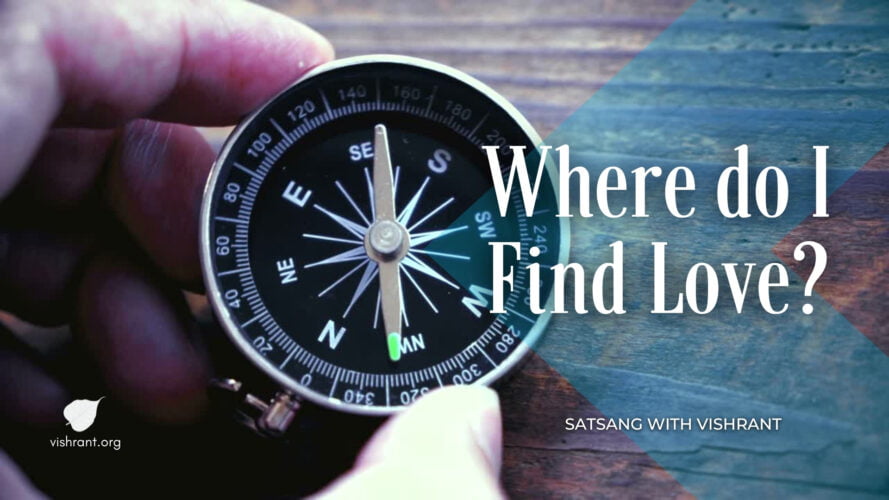 Where Do I Find Love

In This Satsang Excerpt,

Vishrant talks about one of the most asked questions, “Where do I find love?”, the answer to which is a lot closer than you think. Watch now and tune in.

Please support Vishrant’s ongoing worldwide teachings by making a donation. Your contribution is greatly appreciated and is put towards making these teachings available for those who seek truth and enlightenment. You can make your donation here: https://www.vishrant.org/donate/

And from my perspective the only thing that’s valuable on this planet is love. Having had material wealth when I was young, and success. I know quite clearly that that’s not worth anything compared to love. So we have to, we have to work out what’s worthwhile.

It took me 33 years to work out what was worthwhile. 33 years of being a winner striving to win, to work out that winning is not the jewel of consciousness that it’s made out to be, but love is. We put love second or third or fourth or fifth and we resist life to succeed. And in the resistance of life to succeed, we cut ourselves off from the perception of the jewel of consciousness, which is love, and we think that we’re doing the right thing.

So on the back of a card that has my name on it, there is a statement that says “openness counts for everything” and most people read it and go, oh yeah. They don’t understand the depth of it. How many times do you have to be around the block, doing the same thing repeating yourself and not getting really anywhere before you realise you’re going the wrong way.

It’s lovely, the path to love demands your acceptance of life, pretty much. It demands that you choose a path of non-resistance instead of continually resisting which is what causes suffering. That path also leads to enlightenment. Because it annihilates the ego the ego survives and thrives on resistance or no.

And the ego and its dream of being a somebody that’s been somewhere is going somewhere, is actually the only thing that is in the way of enlightenment. There isn’t anything else, it’s constant contracting to the world because it wants it to be its way.

Yeah, we can succeed with doing that in the world, we can make money. We can buy things and build things. But it won’t really help us find love. If you haven’t really had to look at what’s worthwhile here well, you won’t see it. Most of the Western world doesn’t see it.

We think maybe if we get things we get a good relationship, we get a good job that earns a lot of money, we get a house, we have children, we think that somehow that will bring us profound happiness. It might give us fleeting happiness, that’s true for a little bit.

For that matter, relationships don’t buy you happiness unless you have actually been programmed to be open. Because if you get a good relationship and you’re closed and defended well, that doesn’t work either. Because love doesn’t appear in a relationship where there’s closure and defendedness.

The more stress you put yourself under.

The more you close to try to survive, the less likely you are to feel love.

It’s always here and how it affects the mind is you just want to take care of everything and everyone all the time, It’s very beautiful.

If all you’re doing is trying to survive and you’re resisting and resisting and contracting and defending to survive you just suffer because that’s suffering. That’s how suffering is formed by resistance. And then you’ll blame something else for that. But the truth is, you’ve created your reality because you’re the one that’s offered the resistance. You’re the problem, not something outside of you.

So I teach the way at the heart which is actually quite unusual. People think “oh I’ve heard it all before”.

You might have heard it, but are you operating it?

Are you open enough to perceive love?

Do you love everybody?

Do you have unconditional love?

Or are you very limited?

You have to be honest with yourself.

I don’t think there’s anything more valuable here than love. At the age of 33, I considered myself bankrupt because I didn’t have any love. Not really, I had emotionality. I had a lot of money. But I didn’t have love and I realised it, I recognised it.

There’s a lot of sadness in that, really. Because that’s how our children are going to be programmed as well.

How can that be or what is that?

I don’t know. It just is, it’s here. Whether you can perceive it or not is another story. If you’re wide open it’s easy to perceive. If you’re closed and defended it’s very difficult to perceive. How open are you, see? And what makes you open.

The second time I experienced unconditional love was actually holding a newborn baby and I just felt this overwhelming unconditional love and in looking at it later. I realised I’d been wide open because I was holding something that was very beautiful. At that what couldn’t hurt me and so I was wide open and here love was, it’s always here.

The only thing that stops us from perceiving it is our closures, resistance to life and non-acceptance of life. Nothing else.

Through your experience does that love appear in different gradients.

When I’m by myself and I’m in, there’s just nothing, there’s no love, just love, just nothingness and so, it’s related to being out here to some degree. I can’t say I truly understand it all, because I don’t. I can talk about what I perceive that’s all.

Would you say that the more open a person is, the more love of life they have?

That’s been my experience, Yes, the problem with it is a lot of people think they are open and they’re not. They’ve got unconscious defence systems running that they developed during their childhood against being ridiculed bullied, whatever else and so, these unconscious defence systems are also in the way to truly, truly be open enough to perceive love. We can’t have any defence systems running we have to be vulnerable and being vulnerable is against nature because it’s against survival and so, it’s unnatural in a lot of ways.

So if it’s against nature does that mean that there can be quite a lot of maybe suffering on the path to that point because of the unwinding?

I recognised that I had all these belief systems inside me that had been given to me externally as well and they were in the way. Like, I had a belief that people shouldn’t betray me which most people have that belief, yet everyone betrays.

It’s a belief that’s out of touch with reality and so, I examined the belief to the level where I put enough doubt in it so it had no more power and so, if someone betrays me well, that’s okay. Whereas once upon a time as someone betrayed me I’d like to hit them, you know.

But when I say that’s okay I mean, that’s okay without any form of defence or contraction and so, I can stay open in betrayal because the belief system involving betrayal has been undone and we undo belief systems by putting doubt into them, they lose their power.

What Is Your Core Message?

What Is Spiritual Sexuality?

Who Can I Trust On The Spiritual Path?

Why Do You Teach The Way of the Heart?

You Are That – Guided Self Enquiry with Vishrant